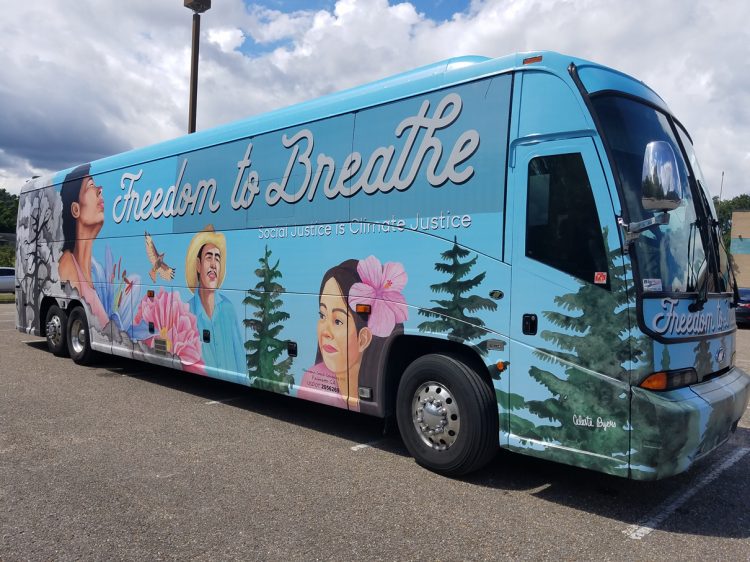 The Freedom to Breathe Bus Tour visited Africatown on August 30 to draw attention to the immediate impacts of climate change in poor communities. 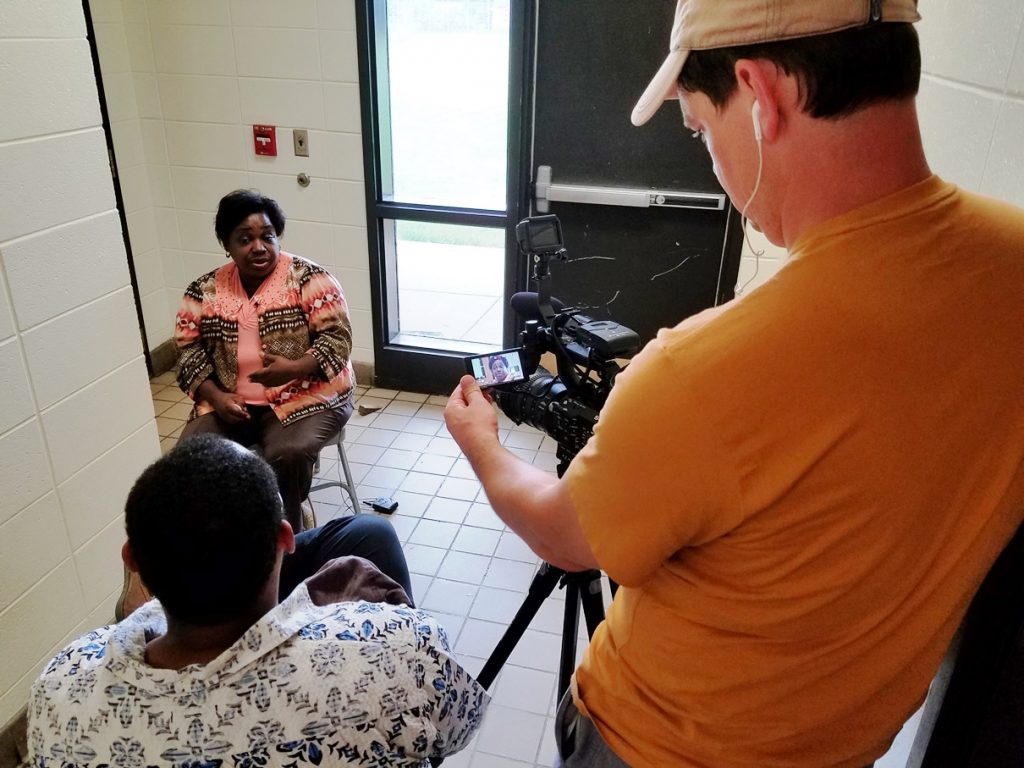 don’t understand how it adversely impacts us,” said Joe Womack, executive director of Africatown-C.H.E.S.S., which is a  member in the Mobile Environmental Justice Action Coalition ( MEJAC).

The tour was organized by Climate Nexus, a nonprofit working to change the conversation on climate change and clean energy from an argument to a constructive search for solutions. The tour also highlighted the work that local organizations such as MEJAC are doing in underserved communities that often take the first hits caused by climate change. 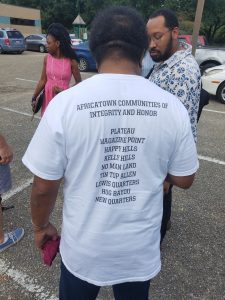 “Studies have found that climate change disproportionately impacts low-income communities and communities of color,” noted Dr. Adrienne L. Hollis, Director of Federal Policy at WE ACT for Environmental Justice, a leading environmental justice organization that is supporting Climate Nexus and a number of community organizations participating in the tour through a grant received from the Environmental Defense Fund.

“We feel a lot can be learned from the work these local environmental justice organizations are doing,” added Hollis. “Because, unless we suddenly make some dramatic changes with regards to energy and emissions, every community is going to have to learn how to deal with these challenges on a local level.” 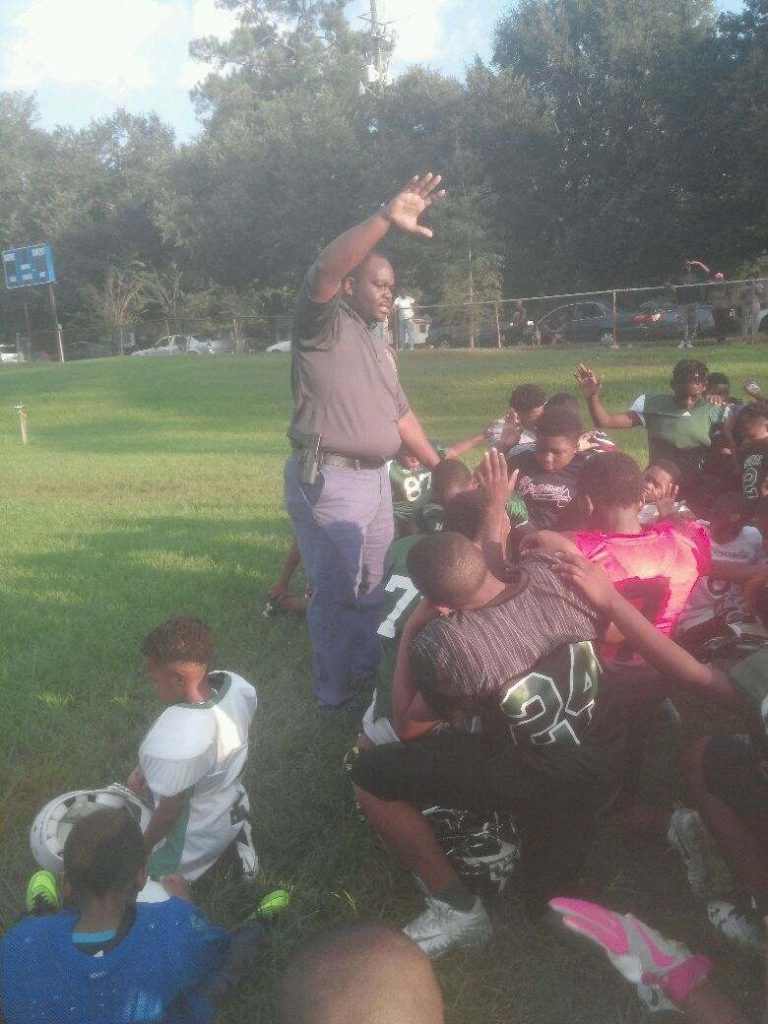 Africatown-C.H.E.S.S. Project Coordinator Joycelyn Davis organized a meet and greet for Mobile Police officers and the Kidd Park Football Team to build relationships with youth by giving them advice on a number of issues young people face today.

Coaches Rico Ruffin, Reginald Park, and Demetrius Holifield took time out of their training to give Detective Jason Jones and Officer Nathaniel McCarty (who is also a minister) time to share their stories and advice with the team of young men.

The topics they discussed included leadership, staying in school, 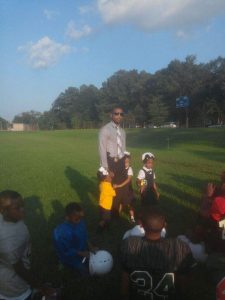 making good choices as well as explaining what it is like to be a police officer. Officers also included that young men should listen to their parents and coaches because their advice could successfully guide them in becoming men and starting a family.

The discussion ended in prayer. The young men were very well behaved and respectfully listened to, and hopefully took to heart, all the officers’ advice.

More than 200 members of The Williams Family, who hailed from Chin Street in Magazine Point, toured the Africatown Community during their family reunion, held during the first weekend of August 2018.

Family organizer Arneese  Williams, who now lives in Washington, D.C., said about 75% of her family members had never been to Mobile. They were very much impressed with the history of Africatown during their bus tour and their visit to the Whippets Den to view our historical artifacts.

Other sites the Williams family toured during their visit included downtown Mobile, the beaches of Gulf Shores and the casinos in Mississippi.

Africatown’s work with the National Park Service (NPS) on the Africatown Connections Blueway is yielding more attention with help from one of the NPS’ new interns.

Margaret Gach, a fellow working with the National Park Service this summer in Washington, D.C., was tasked with creating a newsletter highlighting the NPS’ Rivers, Trails, and Conservation Assistance program. This first national newsletter that will go out to more than 10,000 subscribers across the country highlighting the program’s work across the nation. The newsletter first edition focuses  preserve history and culture.

Ms. Gach was treated to a special tour of Africatown to the points of interest along the water trail. And she sampled a bit of Southern cuisine at Wintzell’s Oyster House.

Africatown’s C.H.E.S.S. answered an emotional plea for help by a resident who for years had begged Mobile City elected officials to cut brush in the dangerous ditch near her house at the intersection of Shelby and Susie Ansley Streets.

The ditch had become the haunt of snakes and alligators that have been seen coming out of that ditch, which was not cut on a regular basis. It is the only open ditch in Plateau. After reaching out for help, the MCTS Alumni Association, Africatown C.H.E.S.S., Yorktown Missionary Baptist Church Pastor Chris Williams and the Mobile County NAACP sent emails and made phone calls to city officials, including the area’s council representative, City Councilor Levon Manzie.

A day later, Pastor Williams took Councilor Manzie on a tour of the ditch and other bad spots around Africatown. That week, employees from Mobile’s Public Works Department cleaned out the ditch to make it safer for children that play there and adults who walk in the area. The ditch is within 50 yards of Africatown’s Kidd Park, to which Councilman Manzie has said he will allocate $500,000 for renovations.

Also, Councilman Manzie was also given a tour of Paper Mill Road, the worst paved road in Mobile County. He pledged to work with County Commissioner Mercia Ludgood to make improvements to Paper Mill Road.

Leaky roofs among the low-income residents of Africatown will become less of a problem, with help from the MCTS Alumni Association., C.H.E.S.S., the Mobile County NAACP and Yorktown Missionary Baptist’s Pastor Chris Williams from Yorktown Baptist Church.

They have purchased and placed blue tarps on houses to provide affected Plateau residents with temporary relief to keep themselves dry as they struggle with how they are going to pay for expensive roof repairs.

Africatown-C.H.E.S.S. is working to maintain a stock pile of blue tarps for those all residents in need.