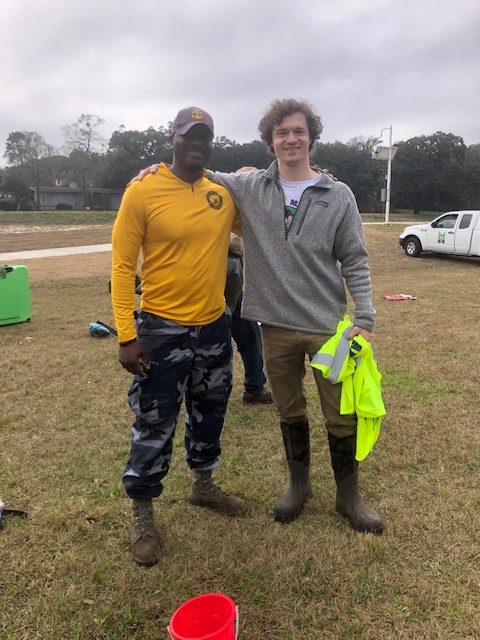 The MLK Day of Service is observed as a day on, not a day off. It is intended to empower individuals, strengthen communities, bridge barriers, create solutions to social problems, and move use closer to Dr. King’s vision of a “Beloved Community”.

“I found out about the MLK Day of Service trash pick-up on-line,” said Lewis, “I called for more information and started coordinating through Phyllis.”

The event was originally scheduled for Jan 19, but was postponed two weeks due to inclement weather. Phyllis Wingard, the outreach coordinator for Keep Mobile Beautiful, said she was worried they wouldn’t have the same turnout as last year due to the date shift.

“Last year we had 300 volunteers, but because of the date change, we weren’t expecting the same turnout,” said Wingard. “The Navy really saved the day, when Jason said he was going to bring some of his guys out, I never imagined he would bring over 100 people, it just blew my mind.”

Wingard said she was moved to tears when she saw the outpour of support from the Navy.

“I wasn’t surprised to see so many Sailors come out to volunteer, it’s the heart of a Sailor, it’s what they do.” said Lewis. “There hasn’t been a time that I haven’t have a minimum of 40 Sailors volunteer to go and serve.”

The trash pick-up focused on three main areas, One Mile Creek, Three Mile Creek and Eslava Creek. This is the third year the event was held in this area.

“Three Mile Creek was once the city’s primary drinking water supply and also served as a place where churches and families used to hold religious baptisms,” said Wingard. “It has played a very significant roll in this city’s past and we want to preserve it for generations to come by keeping it clean and free of trash.”

This isn’t the first volunteering event Lewis organized and says he couldn’t do it alone. He commented on the continuing support he receives from Cmdr. Mark Yates, commanding officer of NRLA, and Master Chief Navy Counselor Shawn Dewette,  to participate in community volunteering projects.

“I have been organizing Navy volunteer events in the Mobile area since I reported to the school house last year,” said Lewis. “I’ve mostly been working in Africa Town organizing clean-ups, mowing and landscaping, working carpentry on some homes and working with the youth.”

According to Lewis, the training staff at NRLA shows their students how to be a part of the community, not just tell them how. They show them that volunteering is an important part of what it means to be a Sailor.