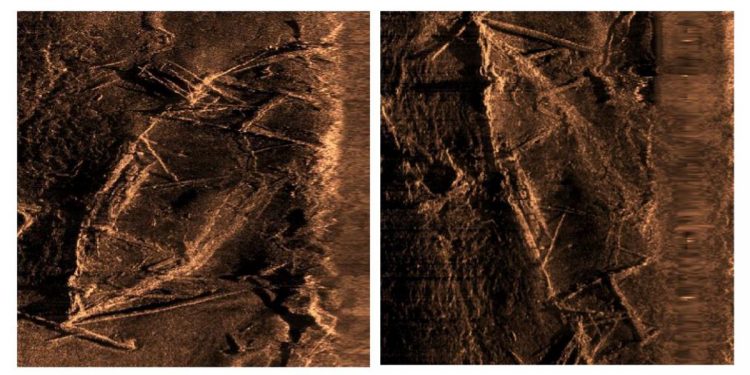 {Images by the Alabama Historic Commission}

In the FY 2021 budget, the State of Alabama through Gov. Kay Ivey and the Alabama State Legislature appropriated $1 Million to the Alabama Historical Commission to begin Phase 3 of preservation efforts for the Clotilda in October.

This multifaceted phase includes targeted artifact excavation with industrial dive efforts supporting environmental and structural assessment of the site and an engineering study of the riverbed to inform stability. The environmental study will examine the composition of the sediment around the wreck, monitor water movement, and contain a biological review of the species that have colonized the wreck area. A structural assessment will appraise the level of deterioration and condition of the wood, creating an evidence-based plan for long term preservation. Finally, the engineering study will evaluate what is needed for site protection as well as the integrity of the riverbed for consideration of erecting a memorial on site.

“The Clotilda is a priceless and significant artifact very much deserving of our respect and remembrance. Protecting this resource is imperative,” Gov. Kay Ivey said. “The Alabama Historical Commission has been devoted to carrying out their mandate of guardianship, acting with the ship’s best interests,” said Ivey. “By preserving the Clotilda, Alabama has the opportunity to protect a piece of history, and I look forward to Alabama carrying out that responsibility.”

For more than twenty years, the Alabama Historical Commission (AHC) – the State’s Historic Preservation Office – has been supporting the effort to find the Clotilda, issuing permits and grant funding to archaeologists and firms since 1997. Now that the vessel has been identified by scientific experts contracted by the AHC and National Geographic Society, the agency has been focused on being methodical and deliberate with all considerations for its preservation. With support and funding from Gov. Ivey and the Legislature, AHC will move forward with the next stage of preservation beginning October 2020.

“Africatown exists because of the Clotilda,” said Alabama State Senator Vivian Davis Figures, whose district includes the Mobile community. “It is paramount that the story of the men, women and children who were brought here from Africa for the purpose of slavery, be told and passed on by their descendants. With the confirmation of the vessel, there is no denying the brutality they suffered, and the reality of how they survived and built a community in Alabama in spite of all the things they endured.”

The Alabama Historical Commission is charged with protecting, preserving and interpreting Alabama’s historic places. This responsibility also includes abandoned shipwrecks, or the remains of those ships, and all underwater archeological artifacts embedded in or on lands belonging to the State of Alabama. This mandate is set forth in the Abandoned Shipwrecks Act and the Alabama Underwater Cultural Resources Act.

“The Alabama Historical Commission has a vital role as the legal guardian of the Clotilda,” said Lisa Demetropoulos Jones, Executive Director of the Alabama Historical Commission. “It is our tremendous duty to ensure that this historic artifact survives so that the world never forgets what transpired during the Transatlantic slave trade. We are deeply appreciative to Governor Kay Ivey and the Alabama State Legislature for supporting this effort and preserving this story for the world.”

“During this period of deep reflection on the shared history of all Alabamians, the Alabama Historical Commission is grateful for the opportunity to move forward with work to provide additional protection and preservation of the last-known slave ship Clotilda,” said Eddie Griffith, Alabama Historical Commission Chairman. “Through this effort, we will investigate an appropriate way to memorialize the shipwreck and the people brought to our state against their will and enslaved, but who nevertheless built a lasting community where proud descendants still live today. Alabamians have overwhelmingly supported the protection and interpretation of this discovery and we appreciate the generous funding provided through Governor Ivey and the Alabama legislature.”

In the archaeological report released May 2019, the wreckage of the Clotilda is described as being in a fragile state; the vessel was scuttled and burned in July 1860 in an effort to conceal and terminate evidence of the premeditated crime of human trafficking by co-conspirators Captain William Foster and Timothy Meaher. According to oral histories by locals familiar with Mobile’s maritime history, Clotilda’s remains were dynamited in the 1940s or 1950s, possibly to salvage materials from the ship, or as an attempt to further destroy the wreckage.

As part of AHC’s calculated oversight of the vessel, the agency implemented a strategy to maintain ongoing documentation of the vessel throughout all phases of project. SEARCH Inc., contracted by the Alabama Historical Commission, has continued to scan the area of the Mobile River near Twelve Mile Island where the vessel identified as the Clotilda is located, documenting the infamous slaver as well as the many other vessels in the vicinity abandoned in a ship graveyard.

This ongoing observation has proved to be a crucial step in assessing the overall integrity of the ship as the agency moves into the next phase of preservation. The Alabama Historical Commission has released new sonar images of the Clotilda wreck.

The newly released images of the vessel (taken March 2020) reveal that the full form of the ship is now clearly visible and exposed. In March, the river levels were lower than when documented in September 2019 and with little current. These prime conditions allowed for a slower set of continual sidescan sonar passes near the vessel, yielding the clearer images of the wreck.

The ship’s interior is of critical archaeological importance as it could retain considerable archaeological and forensic evidence of the slave trade voyage of Clotilda and the illegal transportation of 110 African human trafficking victims who were brought to Mobile, AL for the purpose of enslavement.

“Phase 3 archaeological investigations will provide important information that sheds more light on the stories of those who were captured and transported aboard the Clotilda,” said Stacye Hathorn, State Archaeologist. “It will also inform us regarding the condition of the wreck itself and help us to make the most responsible and best decisions about how to preserve and memorialize the vessel.”

Tandem to AHC’s charge to preserve the Clotilda, the agency has a mission to protect the artifact. In doing so, the AHC filed an Admiralty Claim on the Clotilda in July 2019 along with a motion seeking a final order from the Court in September 2019 to confirm the State of Alabama’s ownership of the vessel so that the State can exercise all rights associated with ownership. In April 2020, Federal District Judge Kristi Dubose awarded ownership of the Clotilda to the Alabama Historical Commission.

Through the Federal Court’s maritime jurisdiction, a key benefit of pursuing an Admiralty Claim involves the retrieval of any artifacts that have been taken from the Clotilda. This authority is a strategic effort to also prevent against future attempts of “salvagers” who may defame the ship, or its artifacts, by taking from it. Per the enforcement of the Admiralty Claim, the Federal Court will be able to retain jurisdiction in the event assistance is needed for further orders, or to preside over legal issues that could arise during work to preserve, protect, and promote the artifact.

The Alabama Historical Commission continues to assess security needs and the most effective way to meet them. The AHC holds this artifact as an irreplaceable cultural treasure and will prosecute any tampering or encroachment to the fullest extent of the law.

The site of the Clotilda is now protected by a “Boats Keep Out” zone authorized under regulation 220-6-.19 of the Administrative Code of Alabama. Only vessels and persons authorized by the Alabama Historical Commission may access the site. ALEA State Troopers assigned to the Marine Patrol Division regularly patrol the area, and violators will be cited.

Since the announcement of the identification of the Clotilda, droves of visitors have traveled to Alabama – specifically Africatown – to pay their respects to the 110 individuals aboard the ship and to honor the nearly 12.5 million Africans who were forcibly migrated during the transatlantic slave trade. The Clotilda is significant to Alabama and is also internationally relevant. Preserving the ship is of critical cultural importance for our entire nation.

Centers of education across the country have ushered in millions of visitors seeking to learn more about the complex and under shared history of African Americans in the United States.

In March 2020, AHC announced a partnership with the History Museum of Mobile, Mobile County Commission, Africatown community members, and the City of Mobile to support a Clotilda exhibit at a new facility – the Africatown Heritage House – which will be located in the heart of Africatown. The exhibit will feature items from the History Museum of Mobile’s collection, an area for Africatown community stories, and will display Clotilda artifacts on loan from the Alabama Historical Commission.