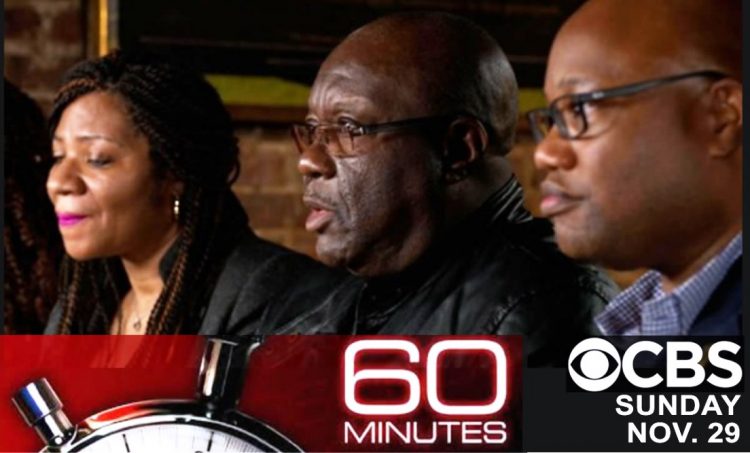 Cooper and 60 Minutes’ producers and film crew arrived in Mobile February 2020 to learn more about the Clotilda and the story of those 110 Africans who were illegally shipped to America, 52 years after the US banned importing Africans as human cargo in the Trans-Atlantic slave trade. Their story is often told by their descendants., some of whom still live in the Clotilda Africans founded in 1866.

The 60 Minutes visit continues a long line of other news media — local, regional, statewide, national and international — who have visited this uniquely historic community during its 154 years. However, recent interest in Africatown skyrocketed after the Clotilda’s wreckage was discovered by local reporter Ben Raines in 2018, then later publicly verified in May 2019 by the Alabama Historical Commission and National Geographic that aided in the search.

Cooper and the CBS film crews came during the second annual Spirit of Our Ancestors Festival, which was founded by CHESS Community Engagement Officer Joycelyn Davis.

The Clotilda’s discovery in the Mobile River near Twelve Mile Island at long last verified the descendants’ stories told to them by their African ancestors, who were bought and sold on a bet that local plantation owner Timothy Meaher could get away with the scheme. He and his co-conspirators burned and sunk the ship to hide their crime, for which they were truly never held to account, considering that the act of piracy was punishable by death. The Meahers grew to be a prominent and influential Mobile family. Their descendants are still major landholders in Mobile, including Africatown.

One of the persons who will be featured in Cooper’s 60 Minutes interviews will be Mike Foster, a direct descendant of the Clotilda’s captain, William Foster. Mike Foster recently learned of his heritage and journeyed to Mobile, attending the Spirit of the Ancestors and connecting with his own history.

Airing of Anderson Cooper’s Africatown interviews show had been delayed for months as protests erupted across the country and around the world over the killing of George Floyd and Breonna Taylor, as the entire country was grappling with the suffering that black bodies in white spaces in supposedly post-racial America.

Yet now, in the era of Black Lives Matter, the Clotilda Discovery opens up a new channel of discourse about painful racial rifts and the potential for healing the deep wounds of slavery and its lingering aftermath.

The discovery also opens up powerful new opportunities through tourism to spur Africatown’s revitalization, another long-term dream that the entire community and its supporters have worked to foster for decades. Now, they can tell the Clotilda/Africatown story on their own terms.

Cooper also interviewed Mobile Mayor Sandy Stimpson, whose administration is now tasked with handling the immense interest in the Clotilda story, which is intricately connected to a community that has suffered for decades with industrial encroachment, economic decline and blight.

From the 60 Minutes website on the upcoming Sunday broadcast:

There have been festivals celebrating the history of the Africatown community, which boasted the first Black school in Mobile. But mostly gone are the Black-owned businesses that once formed its core. “We had a gas station. We had a grocery store, post office, all that was a booming area of black-owned business,” says Cassandra Wallace, who descended from Kossulu, a man enslaved aboard the Clotilda who was renamed Cudjoe Lewis. The history was instilled in Wallace, she says. “Very important… My dad sat us down and he would make us repeat Kossulu, Clotilda, Cudjoe Lewis,” she tells Cooper.

Much of the old town disappeared when an interstate highway was built through it. The surviving neighborhoods are shadowed by factories and chemical plants. The Clotilda descendants Cooper spoke to hope the discovery of the shipwreck will bring awareness and new hope for revitalization of the land their ancestors founded. Alabama plans to build a welcome center in Africatown and has promised $1 million for further excavation of the ship.

“We have to do something to make sure that the legacy of those people in that cargo hold never ever is forgotten,” says Patterson

The discovery of the wreck of the Clotilda, the last known ship to bring enslaved people to America, adds new drama to the only surviving American community founded by Africans.

See pictures from Anderson Cooper’s visit in the gallery below and at the second annual Spirit of Our Ancestors Festival.