AFRICATOWN COMMUNITY UPDATE AS OF JULY 31, 2021 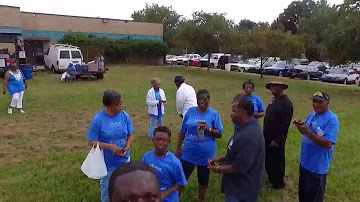 AFRICATOWN COMMUNITY DAY FESTIVAL SET FOR SEPT 5, 2021
Africatown’s annual Community Day Festival will be held Sunday, September 5, 2021. (The day before Labor Day). As usual, everything will be free. There will be free food, free refreshments and free entertainment. Everyone is encourage to come early and claim their places to set up individual tents. Please contact “Plateau Black”- Lamar Howard @ 251-648-4188 or any of his family members for information on how to purchase a souvenir t-shirt for the event.
AFRICATOWN HERITAGE HOUSE STATUS
Due to construction delays, the grand opening of The Africatown Heritage House has been pushed back to the spring of 2022. A very impressive power point presentation of what the interior of The Heritage House will look like was given to some Africatown Organizational leaders by Megan Fowler, head of The Mobile History Museum recently. Ms. Fowler agreed to hold another meeting to give residents with artifacts or books about Africatown an opportunity to have their items placed in the Heritage House. She agreed to announce the date of that meeting at lease 2 weeks before it happens.
AFRICATOWN HERITAGE PRESERVATION FOUNDATION(africatownhpf.org) & SBP(sbpusa.org) COLLABORATION TO REPAIR ROOFS ON HOUSES
The newly formed Africatown Heritage Preservation Foundation has partnered with The Saint Bernard Project(sbp), in New Orleans, to install re-enforced fortified roofing on houses that are in need of them. During the month of June their partnership was successful in installing new free roofing on 5 houses in Africatown. To insure that we spread our work in every area of the Africatown Community, 2 houses in Plateau, 2 houses in Magazine Point and 1 house in Happy Hills were selected for the repairs. Look for flyers to be passed out in Africatown soon on how houses will be selected in the future and community contacts to get your name on the list.
AFRICATOWN HERITAGE PERSERVATION FOUNDATION, KIMBERLY KNOWLES CONSTRUCTION & COMMISSIONER LUDGOOD COLLABORATION TO REPAIR & RE-ROOF HOMES
The Africatown Foundation, Kimberly Knowles Construction & County Commissioner Ludgood have partnered to make internal and external repairs in addition to roof repairs on houses in need within the africatown community. 3 of the 5 houses that received new roofs also received repairs to their internal & external sidings.
AFRICATOWN WELCOME CENTER
The design and engineering contract has been awarded to do the architectural design for The Africatown Welcome Center. The “primary recipient” of the design and engineering contract is Studio 2H Design, an Alabama firm with credits that include “campus master planning and historical documentation” of the Historic Bethel Baptist Church and the Carver Theater/Alabama Jazz Hall of Fame in Birmingham. MASS Design Group, which designed the Equal Justice Initiative’s National Memorial for Peace and Justice in Montgomery, also is involved.

Other parties on the design team include StudioRotan, MBA Engineers Inc., SARCOR LLC and HM Yonge & Associates. The design of the building is expected to take about 6 months.

AFRICATOWN BUSINESS CENTER & FOOD PANTRY
Thanks to a collaborate effort between County Commissioner Merceria Ludgood, Mayor Sandy Stimpson, Councilman Lavon Manzie, Senator Vivian Figures & Representative Adline Clarke, the old Scott Credit Union Building in Africatown has been purchased and will be used as an Africatown Business Center and Food Bank.  Although the building has been vacant for more than 25 years, it is in excellent condition. The city purchased the building and the county will provide the funds for maintenance on the building.  This collaborate effort was needed after the approval of a state bill introduced by Senator Figures & Representative Clarke that created The Africatown Re-Development Corporation.
AFRICATOWN RE-DEVELOPMENT COOROPRATION

AFRICATOWN HOME REPAIRS – CITY SPONSORED
In the muggy morning heat, more than 220 volunteers were out working at 10 locations throughout the Africatown and Plateau area. Over the next several days, they will have replaced the roofs on nine houses and given seven houses a fresh coat of paint. All these upgrades help keep Mobilians in their homes and improve neighborhoods by addressing problems that could cause properties to become blighted.
The City does similar work through paid contractors as part of other affordable housing programs, but we are able to expand the impact these programs have thanks to volunteers from groups like Mission Serve. The volunteers in Mobile this week represent a wide spectrum of ages, Christian denominations, and geographic locations. What a blessing it is to have them here helping our citizens and our City!