The Alabama Power Foundation awarded a $75,000 grant to the History Museum of Mobile, putting it one step closer to sharing the Clotilda story and the town created by the African survivors who suffered as human cargo bound for American slavery in the schooner’s belly.

The funds will help create, curate and construct the new Clotilda exhibit inside the Heritage House, the  first new facility to serve as a focal point for tourists and others interested in the global history of Africatown.  The Museum’s interpretive project will house artifacts from the ship’s wreckage and will reside in the heart of Africatown. The muesum is working in partnership with the Alabama Historical Commission.

Mobile County Commissioner Merceria Ludgood, with support from the City of Mobile, spearheaded the effort to assure residents that the Clotilda Discovery and relics taken from it would remain in Africatown to benefit the community. The Heritage House is separate from the Africatown Welcome Center, a project managed by the City of Mobile using the nearly $3.6 million in  RESTORE Act funds stemming from lawsuit settlements in the BP Oil/Deepwater Horizon Disaster. 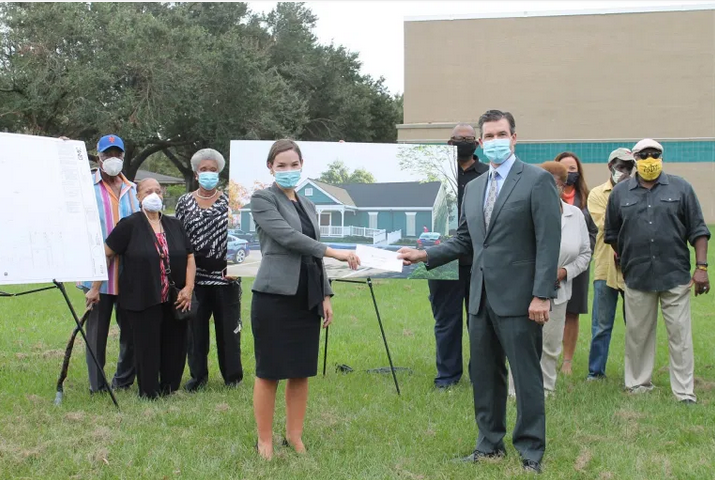 History Museum of Mobile Director Meg Fowler, left, receives an Alabama Power Foundation grant from Alabama Power Mobile Division Vice President Patrick Murphy on the site of the future Africatown Heritage House, which will be home to an exhibit on the Clotilda. (Alabama NewsCenter)

“The History Museum of Mobile is extraordinarily grateful for the grant from the Alabama Power Foundation, which will allow us to execute the high-quality exhibition that the subject matter and the people of Africatown deserve,” said History Museum Director Meg Fowler.

“This exhibition will be a central, physical location for locals and tourists alike to discover the details of this important history. The exhibition will cover the story of the Clotilda and include some of the artifacts that have been recovered from the shipwreck, with a special focus on the people of the story – their individuality, their perseverance and the extraordinary community they established,” she said.

Alabama Power Mobile Division Vice President Patrick Murphy presented the grant at a special ceremony at the site of the forthcoming Africatown Heritage House, which is expected to open in late summer 2021.

“Alabama Power Foundation is very proud to be a partner in bringing the Clotilda exhibit to the Africatown community,” said Murphy. “The story of the Clotilda is an important part of our history here in Mobile as well as on the national and international stage, and we hope this exhibit will keep the story alive for generations to come.”