News that underwater archaeologists, divers, historians and preservationists confirmed that one of the shipwrecks in the Mobile River delta was indeed the Clotilda slave ship brought celebration to all of Africatown.

C.H.E.S.S. was among the community organizers of the May 30th event. Some of its members, whose kidnapped ancestors were brought over from the Kingdom  of Dahomey (present-day Benin), were among those taking part in the celebration ceremonies. 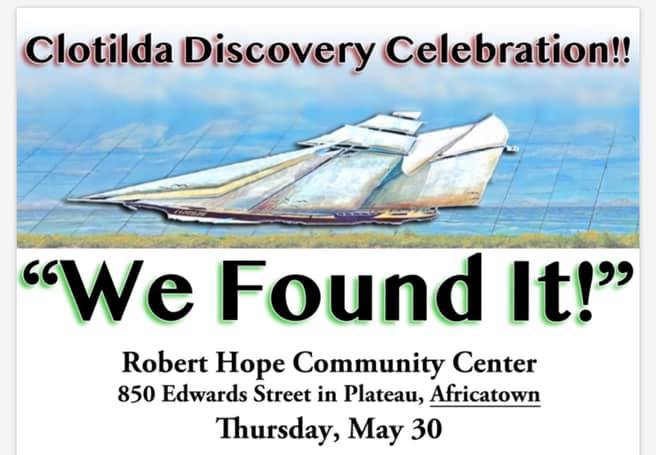 The Alabama Historical Commission and National Geographic — working in conjunction with SEARCH Inc., the National Park Service (NPS), the National Museum of African American History & Culture (NMAAHC), and the Slave Wrecks Project (SWP), and Divers With a Purpose — took part in examining a second sunken ship wreck that former Al.com reporter Ben Raines found after his first find turned out not to be the Clotilda.  The AHC search team took part in excavating artifacts from the second wreckage last year and testing them to see if they could be accurately linked to the Clotilda.

When AHC officials confirmed that the second ship was in fact the Clotilda, they met first with Africatown descendants and residents about their discovery. Joycelyn Davis, CHESS’s Community Engagement Officer and a descendant of the Clotilda African Charlie Lewis, was overwhelmed when she heard the news.

“I got chills when I heard the words, ‘We found it’,” she said, recalling that moment. “I put myself on the boat. Of hearing the waves, the screams and voyage itself . . . and thankful that my great-great-great grandfather survived it,” she said during a press briefing before the press conference.

The find helped validate the story that Africatown residents had held so closely for years, almost as it if were urban legend, that a plantation owner bet he could smuggle Africans into America, even though it was illegal to do so at the time. The family of that plantation owner, Timothy Meaher, and the Clotilda Captain William Foster have never publicly commented on their ancestors’ role in this history.

Now, residents hope to harness the power of the story in ways that bring honor to the ancestors who, as strangers in a strange land, managed to build and govern a thriving community whose remnants last to this day. They also hope the find will provide an economic boost to the community through tourism because of the national and international spotlight focused on Africatown as a result of the Clotilda discovery.

Read among scores of local, national and international stories about the Clotilda discovery HERE, but we have listed some of the stories, collected some photos and videos about it below: