Two community events in February continued to highlight the power of Africatown’s story and its potential to energize efforts to revitalize its neighborhoods, as well as attract major news outlets.

Spirit of Our Ancestors

C.H.E.S.S. Community Engagement Officer Joycelyn Davis spearheaded the 2nd Annual Spirit of the Ancestors Festival on Saturday, Feb. 8, with support from the new Clotilda Descendants Association, as well as CHESS and the Mobile County Training School Alumni Association. It featured a major speaker and a visit by CBS news producers who brought journalist Anderson Cooper. 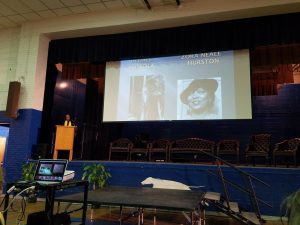 Dr. Deborah G. Plant delivered a poignant and pointed address on her New York Times 2018 best-selling book Barracoon: The Story of the Last “Black Cargo,” which she edited from the unpublished notes of  Zora Neale Hurston’s interview with Cudjo Lewis. He became the most famous and often interviewed member of the Clotilda Africans illegally brought to Mobile by the ship’s captain and plantation owner Timothy Meaher.

Plant read portions of Cudjo’s heart-wrenching tale in the dialect that Hurston preserved. Her notes also preserved his African name (Kossula) and his attempt to retain the folklore and culture he lost when the King of Dahomey (present-day Benin) sacked his town, killed its chief and older residents, and sold him into slavery with 109 other young boys, girls, men and women.

He was about 19 years old when captured, so he likely kept the speech patterns of some form of Yoruba, plus English that he had to learn in order to survive and its black  vernacular, all in a Southern Alabama accent, Dr. Plant said.

“Everything that happened to him is encoded in that language,” which Hurston preserved and refused to change despite pressure by her publishers to write in standard English, she said. “Her publishers didn’t want to read or hear what they weren’t used to hearing. They wanted to change it so they could access it rather than change themselves so they could access what Kossula was talking about.”

Despite having been stripped naked of their clothing and all resources, they managed not only to survive, but build their own town, created their own society, raised families, respected their elders and buried their dead, all by drawing on the strength of their African cultural heritage and worldview. That is the medicine that helped to heal their mental suffering, Dr. Plant said. And in there example is our healing, she told an audience of about 200 people. “This is the power of the ancestors  . . . Hurston was able to capture the humanity and the divinity.”

In addition to her presentation, Dr. Plant also invited to the stage Dr. Natalie Robertson to answer questions about what parts of Africa Cudjo and his shipmates came from. Dr. Robertson went to Africa to find the connections for her dissertation, which became her 2008 book, The Slave Ship Clotilda and the Making of AfricaTown, USA: Spirit of Our Ancestors.

In addition to the speakers, Alabama State Tourism Director Lee Sentell brought a resolution of support from Alabama Gov. Kay Ivey. He said the state has included Africatown in its Civil Rights heritage tourism marketing campaigns.

Towards the end of the festival, CNN anchor Anderson Cooper made a visit. He and a production crew with 60 Minutes had been in town conducting interviews with the Clotilda Descendants on Feb. 7 at Kazoola, the bar and eatery of Africatown native Marc Jackson. Cooper also interviewed Africatown leadership, the teams who found the Clotilda, local historians and Mobile Mayor Sandy Stimpson.

In all, Joycelyn and those who were part of the program — including Dr. Joel Lewis Billingsley, a Cudjo Lewis descendant and mistress of ceremonies — were pleased with this year’s event, the vendors and the supporters, including volunteers with the US Navy under Chief Jason Lewis and local families who provided food for the guests showed up an did a great job. “It’s little things that mean so much,” she said.

Wade in The Water 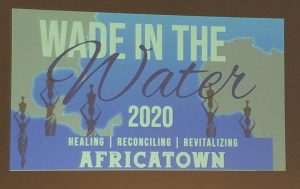 The Saturday festival was extended to Sunday, Feb. 9, with another event, Wade in the Water, held at the GulfQuest National Maritime Museum, which sits along the Mobile River Downtown. Organized through the Africatown Heritage Preservation Foundation, the panel discussion included:

Joycelyn served as moderator for this free event, which was sold out and was the largest such event the GulfQuest has ever hosted. Its purpose was to introduce the local public to the plans and projects currently underway in Africatown by its leaders.

Listen to a portion of the event in this video on the GulfQuest’s Facebook page.

One thought on “A Weekend Celebrating Africatown History and Its Future”