“First they will come for your arm and you will give them your thumb, hoping that will be enough. One year later they will come again for your arm and this time you give them your hand, again hoping that will be enough. the next time they come you give them your elbow. They keep coming and coming until they have it all. After the last shipment of slaves landed in Mobile, Timothy Meaher allowed them to purchase some of his land after the Civil War ended. Since that time, his descendants and others have been trying to get the land back by any means necessary.”

This blog is written to bring our recent Africatown supporters up to date on my personal recollection on the events that have transpired over the past 8 years that have led us to where we are today, with the city looking to change their existing “Family Friendly” zoning and rezoning laws.

On February 25th, the City of Mobile will begin public hearings to learn what Mobile’s public think about proposed changes to the current city zoning laws that have been in place for years. 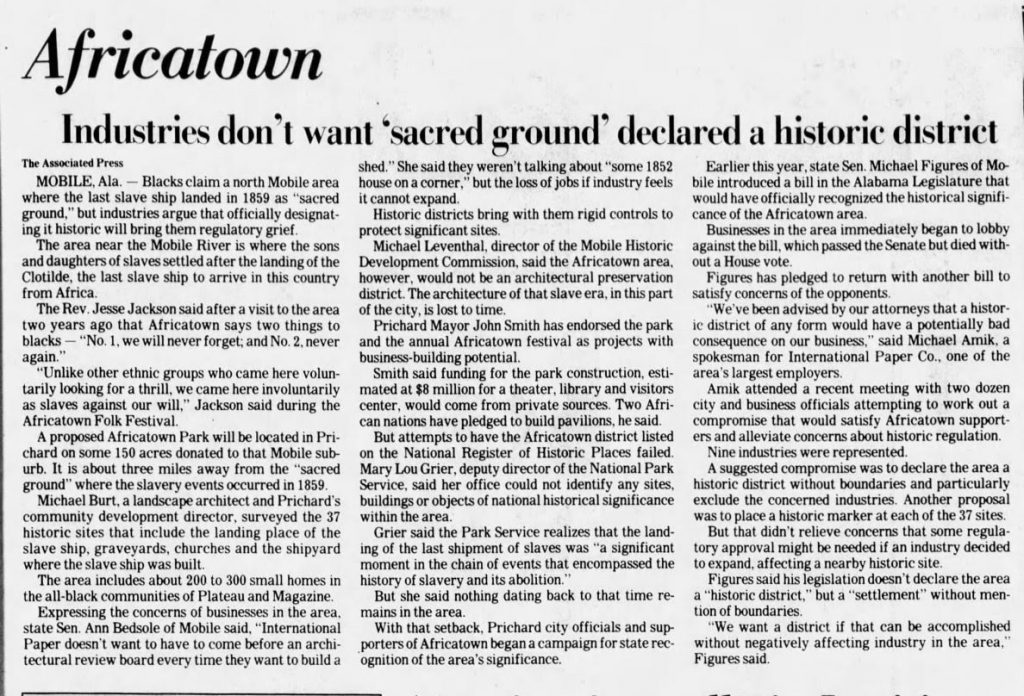 In 2013 the community was informed that the oil industry was putting an oil pipeline thru the community. The community was not aware of this until heavy tractors and trucks were staged on a vacant lot in Africatown. The next morning my phone ranged and someone yelled in my ear ” THEY ARE ABOUT TO BULLDOZED AFRICATOWN TO PIECES!” When I got to the corner of the school and community gardens the workers were already digging trenches to lay pipes. A group of us stood around the fence that surrounds the school yard when their bulldozer headed straight for us. While standing at the front, I might have been run over had someone (Omar Smith) not grabbed my jacket and pulled me out of the way. We thought they would dig around the school, not thinking they would dig through our school’s playground. That entire school year, because of construction, Africatown school students were not able to use the school’s playground area for gymnastic or recreational activities.

After that incident, several community meetings were held between Africatown residents and Mobile’s Public School Superintendent Martha Peek. The residents of Africatown were very, very, very mad. One reason residents were upset was because no one had been told anything about putting oil pipelines underneath our historic school. At those meetings only Ms. Peek, Dr. Reginald Crenshaw and the school principal admitted to knowing anything about the construction. No other person had the courage to stand up and say that they knew anything about the pipeline coming through the schoolyard. That incident made the community mad and united residents in a manner I had not seen since the Henry Williams days of the ’70s, ’80s or ’90s.

Not long after that, the community was told by Mobile’s local Sierra Club that local businessmen had plans to build an oil storage tank farm consisting of about 50 large oil storage tanks across the street from Africatown residents and school to store hazardous and toxic Tar Sands Oil that would be shipped to Mobile in railroad tank cars from Canada. Soon, signs were posted in Africatown supporting that rumor as the Mobile City Council made plans to conduct hearings at their weekly council meetings to discuss the issue.

By this time, Africatown residents had seen enough.

Still fuming from the pipeline issue, organizing the community for a fight was easy. In addition, downtown residents were mad because of having to endure the constant fallout from stockpiles of coal stored along the riverfront downtown and polluting homes and businesses downtown. At this time, Mobile’s first Diverse Coalition of community residents joined forces to fight against industrialization that has had a negative effect on people. It became the fight of “People & Lives vs. Industry & Money.” This diverse group of Mobile citizens, between the ages of 30 and 70, held community rallies, downtown marches and made their voices heard at city council meetings against more Africatown industrialization and the storage of coal openly along Mobile’s waterfront.

Eventually that coalition named itself “Mobile Environmental Justice Action Coalition” or MEJAC. That diverse coalition of Mobile residents became Mobile’s first diverse group to unite against businesses on environmental issues and still exists today. MEJAC obtained a lawyer and begin looking at existing local laws concerning the construction of storage tanks near communities and found that none existed. Consequently, a local law was created that created a SAFETY ZONE between the construction of Storage Tanks and residential communities.

This “war” lasted for 4 years, 2013 thru 2017. We had won “this round”. I say “this round” because I knew as long as the land was vacant, our war between Mobile businessmen and Africatown was not over. As Henry Williams said, “They keep coming and coming.”

My grandfather had a saying also, “The man that made the law can always change the law.”

It was not long after the storage tank issued died down that Mobile’s Mayor announced his plans to implement a “Unified Development Zoning Code” that would change the entire zoning code laws within the city limits of Mobile. This process would include meetings in every community in Mobile city limits. Those meetings were designed for mobile residents to have a say in what those changes might look like. That way elected politicians could say, “I did not make these changes, the people did.”

This blog is intended to be the first of three blogs I will write leading up to that first public hearing to be held VIRTUALLY on February 25, 2021. Please mark that date on your calendar and plan to attend, and let your voice be heard.